Onboard carolers leading you in song 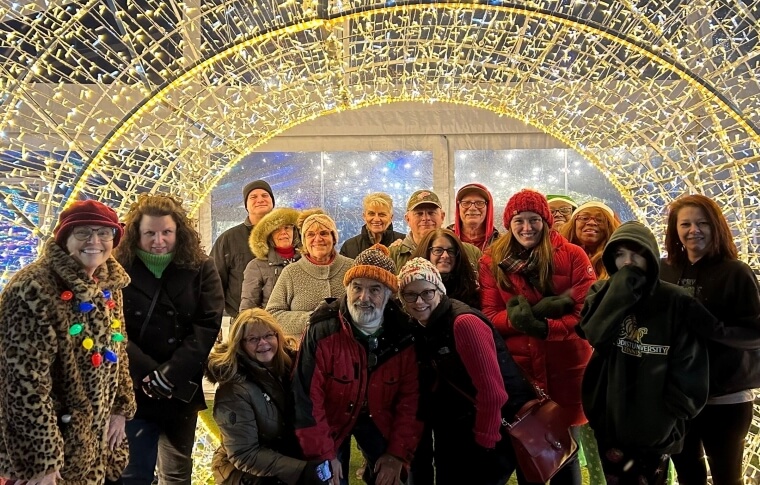 Enjoy seeing Detroit lit for the holidays and leave the driving to us! Create special holiday memories aboard our comfy, cozy motorcoach and visit several spectacular light installations and seasonally decorated attractions. This fun and festive 4-hour Holly Jolly Lights Tour allows for ample time at each location.

Dress for the weather! We get off the bus at the different parks where you’ll spend 30 minutes or more on your own.
This is NOT a “Bring Your Own Booze” bus tour due to insurance. (Drinks can be purchased at various stops).

Enjoy seeing Detroit lit for the holiday season – the best time of the year – and leave the driving to us! Create special holiday memories aboard our comfy, cozy motorcoach and visit several spectacular light installations and seasonally decorated attractions. This fun and festive 4-hour Holly Jolly Lights Tour allows for ample time at each location.

Onboard singers kick off the holiday cheer as we carol merrily to and from downtown and to different destinations. Curbside dropoff at the various attractions allow you to enjoy this holiday outing with friends/family without worrying about where to park.

Get out your ugly sweaters, antler ears, Santa hats, etc. and celebrate this most magical time of the year. Prizes awarded to those best repping this holly, jolly time of year.

What’s in store on this holiday tour:

Note: *Times are estimates and may need to be adjusted (lengthened/shortened) based on weather and other circumstances beyond our control.

Check out what our guests are saying

This is more of an experience than a tour. Four major conductors in the UGRR, dress in character and walk you through the city’s major locations, where, in the 1840s and 50s, was a hotbed of abolitionist sentiment and where thousands of fugitive slaves were spirited in secret to various “stops,” then onto awaiting boats to take them to freedom—less than a mile away in Windsor, Ontario. I’m a native Detroiter and this was my second time on the tour; it was that good! Read more

Nancy was our guide for the See the D tour. We decided to take a visiting out-of-town relative down to Detroit, but realized we didn’t know much about it despite having lived here all of our lives. Nancy was extremely informative and accommodating. Read more

To be honest, I didn’t have the best impression of Detroit before visiting but Pat at City Tour Detroit changed all that! She was a wonderful tour guide that had so much passion and love of Detroit…it was definitely contagious! I learned so much from her — she had great facts about all the locations we visited. 10/10 Read more

My girlfriend and I took a trip to Detroit and reserved The see the D tour. Our guide Nancy did a great job. She covered a wide range of topics and made the city feel very unique. Read more

This was a very fun activity to enjoy downtown Detroit. The stories are interesting and some are quite grim. I think that much of the enjoyment is dependent upon how well the group interacts and plays along with the tour guide. This 2.5 hr tour on foot is very easy to walk. Read more

See the D on Wheels